“Judge a man by his questions rather than by his answers.”: Voltaire

Question is defined as a sentence or phrase used to find out information, insight or intelligence.

We may have all experienced this. You are checking out of a hotel room after a few days’ stay. The lady at the checkout counter politely asks you ‘ How was your stay? ‘ And this question seems not to have changed over the years across time zones and continents. And in most cases, a polite yet non committal answer evolves  ‘ It was good ‘ (even though the stay may not have been).
What if (question?) we are asked ‘ What could we have done to improve your stay with us ? ‘ . The energy and the dynamic changes completely. Rather than go on auto pilot mode and offer the default response, you are buoyed by the keenness of the hotel staff to improve the guest experience and you end up offering honest feedback. The answer may not give them exactly what they want to hear. But it will give what’s valuable for them to learn.
As the old proverb goes ‘ Better to ask a question than to remain ignorant ‘.
What if Obvious Questions collide with Contrarian Answers? It’s a discussion worth having. When smart, committed people disagree about the answer to a question, it’s a question worth pursuing. 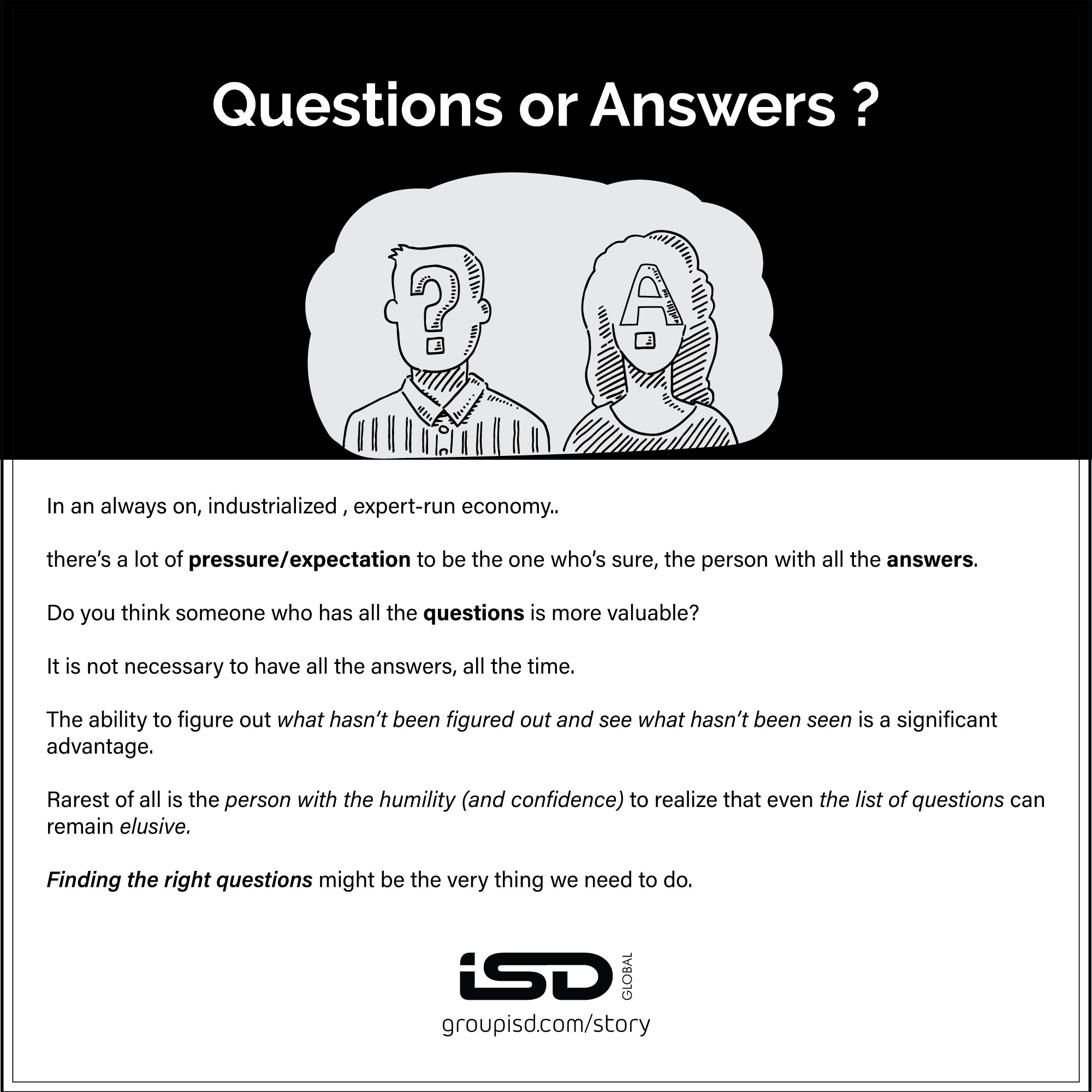 Progress or outcomes? There is no toss up- its got to be progress. Ditto with questions.
HR reviews could have better progress and responses if employees are asked ‘ What challenges are you facing now ? ‘, as that question presumes that challenges are the norm, not the exception. Rather than ask ‘ Are you facing any challenges?’ , when most will say no. They might fear that their admission will be seen as a weakness.
Good insights, contrary to popular wisdom, don’t come from a smart answer. They come from a smart question.
” We awaken by asking the right questions. We awaken when we see knowledge being spread that goes against our own personal experiences. We awaken by seeking answers in corners that are not popular. We awaken when we see popular opinion being wrong but accepted as being right, and what is right being pushed as wrong “- Suzy Kassem
ENDS

Let’s journey back in time. The world was in economic turmoil. The financial crisis was raging. Just a few months earlier, Lehman Brothers, one of the largest investment banks, spectacularly collapsed. Fannie Mae and Freddie Mac, the symbols of the homeownership “American Dream,” became insolvent. Tens of millions of homeowners were delinquent on their mortgages and faced potential foreclosure.

The world was at a low point not seen since the Great Depression.

Then IT happened. An event reminding people that real miracles DO happen. It was an event bringing hope to so many. The timing could not have been better. On January 15, 2009, Captain Chelsea “Sully” Sullenberger and his crew landed the disabled plane( bird hits on take off from LaGuardia airport had decapitated both engines), U.S. Airways Flight 1549, on the Hudson River. All passengers and crew were safe. Sully made the seemingly audacious decision to land a hobbled commercial airliner on a river. How could that ever make sense? Why did the plane not cartwheel? How did the passengers get rescued before the plane sank in the hypothermic water? While there were certainly miraculous elements to the Sully story, much of the flight forensics since this time has revealed the hero of the story: Excellent Decision-making.

A great decision starts with effective data curation. That is, the ability to quickly ingest and process information. We call it curation because the decision-maker must decide from an overwhelming amount of information, what information is most important, and weigh that information. In the decision sciences world, this is known as weighing criteria. In an organizational setting, groups of stakeholders must come together to provide criteria input from multiple perspectives. This often adds complexity to the decision.

One of the most famous examples of successful data curation is when Capt Sully landed the commercial airliner on the Hudson river. How much time did he have to decide? Less than 3 minutes. Yes. A decision that would impact hundreds of lives. In this absolutely awe inspiring story is an unsung hero– the Airbus A320’s cockpit display. A display that allows pilots to quickly understand a small number of critical airplane measures, like airspeed and flight angle. This enables the pilot to make quick and effective decisions. The cockpit display had been designed based on thousands of hours of measure and criteria testing. The Airbus designers created a display that intuitively delivers the most important information to the pilot decision-maker.

In the decision sciences world, the cockpit display design is known as “choice architecture.”

” Choice architecture refers to a scenario in which the environment in which someone must make a decision has been carefully designed to try and influence that decision “.

” Choice architecture describes the way in which decision making is influenced by how the choices are presented (in order to influence the outcome), and is a term used by Cass Sunstein and economist Richard Thaler in the 2008 book Nudge: Improving Decisions about Health, Wealth, and Happiness “.
Getting the choice architecture right is a critical enabler of the best outcomes. In the case of this flight, it enabled Sully to quickly “load shed.” This is a pilot’s focusing action when only the most vital information is needed. Sully was able to quickly load shed unimportant details and focus upon the highest weighted information to choose the best alternative and to make the best decision. The cockpit display delivered to Sully exactly what he needed to know and when he needed to know it.
The outcome was “The Miracle on the Hudson.” A perfect landing on the unusually calm Hudson River that day.
Every time we make a choice, our minds go through an elaborate process most of us never even notice. We’re influenced by subtle aspects of the way the choice is presented that often make the difference between a good decision and a bad one. How do we overcome the common faults in our decision-making and enable better choices in any situation? The answer lies in more conscious and intentional decision design.
The designers of decisions need to consider all the elements involved in presenting a choice: how many options to offer, how to present those options, how to account for our natural cognitive shortcuts, and much more. These levers are unappreciated and we’re often unaware of just how much they influence our reasoning every day.
We are all choice architects, for ourselves and for others. Whether you’re helping students choose the right school, helping patients pick the best health insurance plan, or deciding how to invest for your own retirement..the choice is ours to make!
BTW, very recently my colleagues at ISD Global and me had a chance to attend a fireside chat hosted by Columbia University Professor Rita McGrath( and author of the fantastic book Seeing Around Corners) with Eric Roberts, another Columbia University Professor and author of a new book ” Elements of Choice ” where he dives deep about the concept of Choice Architecture and shares some insightful examples. A book worth reading if you see this( and Behavioral Economics) as a subject of interest.
ENDS