ESSENTIALism: The Disciplined Pursuit of Less. Sounds blasphemous in this day and age. The art of separating the trivial many from the vital few. A few years ago, I came across this fascinating book and after a gentle outreach and gracious response from Greg McKeown, the author, had me falling for the content Book, Line and Sinker.

Turn the caption statement around: Working is Not Productivity. The message once(and even now) was loud and clear. Relentless self-optimisation was a way to cope, but is it really? Humans are NOT search engines !

Productivity, or the lack of it, has become the individual metric of choice for coping with the international econo-pathological clusterfuck of the Corona Crisis. Talk about self optimisation: how do we do that and meet deadlines amidst settling our fighting kids, demanding colleagues and handling our screaming inner critics in the name of introspection? You are fortunate to have a roof over your head and you are also expected to use  ‘ this time ‘ to write blogs, launch your podcast and personal kept in the back burner projects and life-hack our way to some cargo-cult pastiche of normality, and if not, are we somehow letting the side down?

Arbeit Macht Frei. Meaning work sets you free. These words first appeared in an 1873 German novel. And later got adopted by Nazis as a slogan. The mantra of work as freedom or a magical route to happiness has proved incredibly resilient. But, as the corona virus crisis is exposing all over again: for billions of people work is none of these things.The reality is that for billions of people around the world , work is a tightrope walk oscillating between indignity and survival. Happiness as the byproduct of the work you do will come across a masterful con job for many.The task on hand now and onerous at that, is to push for a new narrative for work based not on happiness but humanity.

Questions have an in built audacity to be more interesting than answers. And in the febrile weeks and months that have followed the advent of the Covid-19 lockdowns, the one question that went unabashedly viral was: how do we stay productive when the entire world is going to hell? The virus has upset the human micro biome in an epochal act of strategic surprise.

A whole generation leaned on the fragile learning that relentless work was the way to cope with a rolling crisis with the mood of imminent collapse and economic insecurity that was the piped elevator music of the youth- the relentless tug of war between trying to save yourself and trying to save the world, between desperate aspiration and actual hope.

There could be multiple reasons that we are panicking about work: about to be furloughed or sidelined; or already lost a job. And you are playing catch up(sounds familiar?). Or if you have managed to retain one, you are apprehensive about the long term. And if everything is hunky dory, you are battling at the coat tails of ‘ survivor’s guilt ‘.

We now have a packed schedule: washing up, cooking, cleaning, being a sounding board, lending a helping hand, community work, countless video conference calls with people you have ever and never met and at the end of it hiding in bed hoping that history can’t hear you breathing.

People are working harder than ever but a lot of the work does not fall under the traditional sense of the term ‘ productive ‘. They just don’t count on the ledger of human worth because the economy refuses to value them in its reckoning of what does, because most of it has been done in private, by women, for ages, for free. Making breakfast, making the beds, making sure your friends and family aren’t losing their absolute minds is work that matters more than ever and will continue to matter in the coming decades as crisis follows crisis. It is not “productive,” in the way that most of us have learned to understand what that word means, but it is work, and it is really really worthwhile.

WFH(Work From Home) has seamlessly and unapologetically moved onto W(Work). Geography has become history!

For all those who flaunt their workaholic badges of honor and condescendingly accept the various neurotic flavors that comes with it, let’s come to terms with the fact that we have been conditioned to think that work in the laissez faire zeitgeist is about hyper vigilance. It’s about what happens to people when they are trapped in abusive circumstances and cannot escape. Psychologist Judith Herman observed that “the ultimate effect of [psychological domination] is to convince the victim that the perpetrator is omnipotent, that resistance is futile, and that her life depends upon winning his indulgence through absolute compliance.” We haven’t been able to shrug off the mega legacy of the Industrial Age: Compliance. Phew!

The idea that hustling can save you from calamity is an article of faith, not fact—and the Covid-19 pandemic is starting to shake the collective faith in individual striving. The doctrine of “workism” places the blame for global catastrophe squarely on the individual: If you can’t get a job because jobs aren’t there, you must be lazy, or not hustling hard enough. That’s the story that young and young-ish people tell themselves, even as they have spent the whole of their brief, broke working lives paying for the mistakes of the old, rich, and stupid. They internalized the collective failures of the ruling class as personal failings that could be fixed by working smarter, or harder, or both—because that, at least, meant that they might be able to fix them themselves. Completely Unfair!

After the quarantine, after we count the lives lost or ruined, recession is coming. A big one. For many, especially millennials, it’s the second devastating economic calamity in their short working lives( the first being the Global Financial Crisis of 2008-9), and they are still carrying the trauma of the first. This time, though, they know it’s not their fault. This time it’s abundantly clear that they don’t deserve it. And this is exactly the sort of crisis that gives people ideas about overturning the social order.

The cult of productivity doesn’t have an answer for this crisis. Self-optimizing will not save us this time, although saying so feels surprisingly blasphemous. There is nothing counterrevolutionary about keeping busy. But right now, we have a finite opportunity to rethink how we value ourselves, to re-examine our metric for measuring the worth of human lives.

Time for ESSENTIALism: The Disciplined Pursuit of Less.

125 years is a long amount of time. The AIDA model was developed by the American businessman, E. St. Elmo Lewis, in 1898. The original purpose was to optimise sales calls, specifically the interaction between seller and buyer concerning the product.

Just to expand on the acronym(and the obvious):

Of course the AIDA model is helpful as it provides focus on each area of the customer journey. That being said, allow me a bit of purposeful provocation.
Let’s look at a few reasons why the AIDA model is up for scrutiny:
– Post the ‘ action ‘ stage, the brand is not engaging or conversing with the customer. There is nothing happening after the purchase. In the context of how important customer retention and loyalty is for marketers, this is a pain point.
– In fact, the majority of actions taken by users on social media when it comes to reaching out to a brand involve experience (aka they’ve already interacted with your brand) and for customer service issues (aka they’re already a customer).
Pl refer to the below infographic from Sprout Social on ‘ why consumers message a brand on social media ‘: 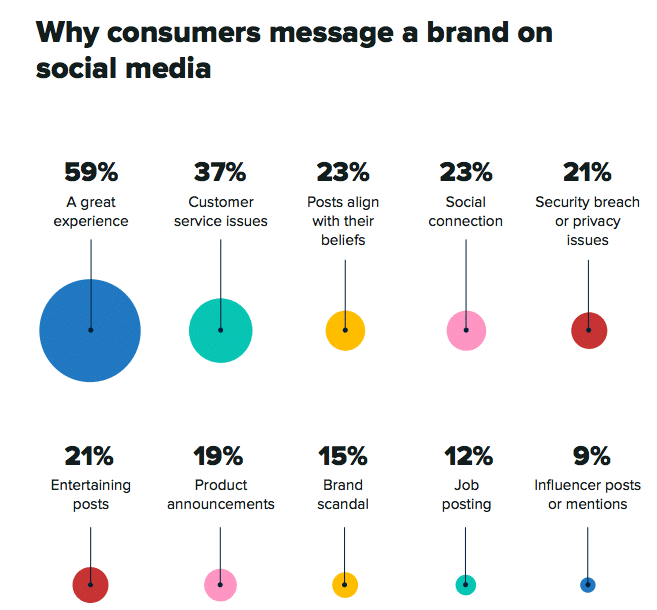 The prognosis is that on social media, nearly 96 percent of people contact a brand beyond AIDA, assuming they’re already a customer.

– The AIDA model was constructed during a phase wherein we were in a  ‘ Caveat Emptor ‘ or Buyer Beware situation. We are now in a ‘ Caveat Venditor ‘ phase or Seller Beware mode. All the more reason for brands to be in continuous engagement and conversation post action/purchase.
– In an increasingly commoditised world, Customer Experience is your best product.
– Incredible, always on accessibility has driven consumers to crave experiences that are both instant and convenient.
– Experiences are no longer between the company and the customer. Any customer experience can become public news overnight.
– Because it’s easy enough to find a great product for a decent price these days. What’s harder to find is a seamless, customer-centric brand experience.
– Brand Loyalty is on the decline. We are in a ”Switching economy”. 86% of customers would pay more for a better customer experience(Kolsky).
– The biggest thing missing when brands manage the customer journey? Conversations.
So, how do we look at a model that can replace AIDA? You must have heard of ‘ Conversational Marketing ‘ – this is more on the lines of ACCA:
A: attract
C: convert
C: close
D: delight
The below infographic devised by B Squared Media is self explanatory. 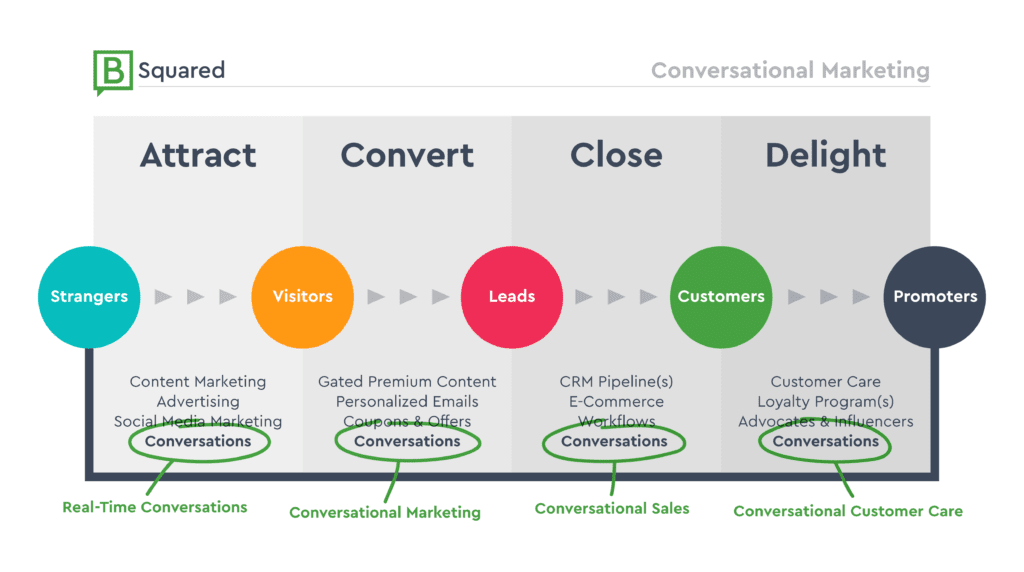 Think of conversational marketing as having real-time conversations with your would-be or actual customers.
Additionally, you might want to check out this feature in BrandKnew on Conversational Marketing at https://www.brandknewmag.com/does-your-2020-marketing-strategy-include-conversational-marketing/
The model is still pretty simple. Each part of the customer journey allows for conversations between you and your would-be (or actual) customers. And if we think about customer experience, that’s what sets the superior brands apart.
Everyone knows when they are dealing with a customer centric brand. It shows. You can feel it. Sure you can go deep and crazy with customer experience but, you can also focus on conversations.
Conversations are the ignored, low hanging fruit of almost every business.
Just to let you in on a little secret: all of the marketing buzzwords(influencers! loyalty ! revenue !) live inside of customer care efforts and for some inexplicable reason, most brands are completely overlooking this part of the journey.
The script to write for brands and marketers in organisations is to move from ROI (in the conventional sense) to ROE( Return on Experience). And any kind of transformative customer experience begins with an engaging employee experience.
In a culture of immediacy, people are becoming ever-more impatient when it comes to their transactions and brand engagement.
Some Food For Thought

– More than half of consumers (55 percent) have intended to conduct a business transaction or make a purchase, but decided not to because of a poor service experience- American Express

-50 percent of consumers give a brand only one week to respond to a question before they stop doing business with them. – RightNow Customer Experience Satisfaction Report

– A 10% increase in customer retention levels increases the value of a company by 30%- Bain & Company
– You need to get to the future, ahead of your customers, and be ready to greet them when they arrive”- March Benioff, CEO, Salesforce.com
Before I sign off, some customer experience benchmarks that are worthy of emulation would include:
Walt Disney: Stooping To Excellence
ACE Hardware: Helpful Hardware People
Ritz Carlton: Ladies and Gentlemen serving Ladies and Gentlemen
Amazon:Building the earth’s most customer centric organisation

A contrarian view as I hang up:

The truth is of course is that there is no journey. We are arriving and departing all at the same time: David Bowie