Have the Crisis Management folks at Boeing flown away?

346 people killed in 2 crashes. One involving Lion Air in October 2018 and the more recent Ethiopian Airlines crash in March 2019.Both involving the Boeing 737 Max 8 aircrafts.​​ That amidst only 1 fatal crash in over 3 million flights last year. Which is a stupendous track record. So, in the light of this, something seems terribly awry, isn’t it?

It’s exactly for situations like this that ‘ Crisis Management ‘ cells or savvy PR departments or Corporate Communications team are constituted by brands, or so we thought.

Ever since the first crash, it has been a series of muddled, fuzzy obfuscation​ and nothing else. Blaming the pilots, software glitch, we are investigating and offering all support, lot of cock(pit) and bull…​

Take a look at the ‘ Enduring Values ‘ section on the Boeing website and this is what it reads like:

We value human life and well-being above all else and take action accordingly. We believe all incidents, injuries and workplace illnesses are preventable. We are personally accountable for our own safety and collectively responsible for each other’s safety. By committing to safety first, we advance our goals for quality, cost, and schedule​ “​.

​Are we missing something here? Is it difficult to walk(or fly) the talk?​

For an organisation like Boeing, with almost 12 Billion US Dollars in cash reserves, was this too much to handle better? We wouldn’t want to think so. More than 50 countries have banned the Boeing 737 Max 8 series to be flown(with US being the last of the nations to do it). Brand allegiance, but at what cost?

Silence is golden but only when appropriate. Boeing CEO Dennis Muilenburg have been conveniently missing in action when most needed except for comments of late saying “the company is “humbled” and “learning.”

Genuine empathy communicated at the right time would definitely have not brought back lost lives but would have surely built a humane face for the brand. It is said that ‘ crisis brings out character ‘ and Boeing seems to have missed the flight.

The reticence could be attributed to the fact this aircraft model contributes almost 30% to the Boeing coffers.After many lives in the coffin unfortunately.(The stock has declined by almost 21% in the first quarter of this year).

Boeing is expected to roll out a software update meant to give pilots more control over MCAS​(Maneuvering Characteristics Augmentation System software​)​​ and make it less likely to malfunction.​  Scary!!

On a wing and a prayer? Some flight of fancy!

DREAMKETING
We are under prepared. The rant is, that we are still mired in Old Economy, Old Product Thinking. But, we must, in fact all of us, take a cue from the likes of the Virgin Group or Tesla and the likes- and come to grips, strategically, with the fact that Winners in the New Age Economy will be …Masters of the Dream Business.
What would that entail; Totally ‘ insane ‘ schools, hospitals, enterprises, retail..going way way beyond the normal suite of services to be in the realm of impossible made possible dreams.
The stakes are high. In fact billions and billions of dollars. So, lets stretch the narrative here.
Digging back on a presentation that Ferrari North America CEO Gian Luigi Longinotti-Buitoni some years ago in Mexico City. Dreams are his mojo. To quote him from the presentation ” A dream is a complete moment in the life of a client. Important experiences that tempt the client to commit substantial resources. The essence of the desires of the customer. The opportunity to help clients become what they want to be. “
Longinotti-Buitoni preaches the  ” marketing of dreams ” – an idea that he compressed into a word of his own coinage: Dreamketing

To guarantee anything in a world gone nuts is well..nuts. So, suggest we take the leap.

Dear Mr CMO, Dear Finance Head, Dear Ms Retail Store Owner. Get an extended lease on your professional life. I will tell you how. Expunge, excise, remove​​ the terms ‘ product ‘ and ‘ service ‘ from your vocabulary. When either of these two words come to your lips, substitute them with ‘ experience ‘ or ‘ dream ‘. That’s all.

This is not a pie in the sky spiel.​ This is a strong business message being sent out by someone, a very practical businessman who has created and enhanced some extraordinary franchises. So, its worth listening to his argument if you are in sync with the fundamental argument that the call of the hour is Totally New Sources of Value Added..in a Totally New Economy.

To ratify, lets put out a grid of ‘ Common Product V/s Dream Product ‘

​Nothing wrong with the brands on the left of the grid. Each offers regular, solid, every day​ response to some need or another. On the right though are brands with a dreamlike power that go beyond the realm of mere ‘ need fulfillment ‘.

So, dramatically alter perspective. Do not rest until that project passes the test of imagination(or Dreamketing). Raise the bar. WAY, WAY UP! To become what you or your client wants. 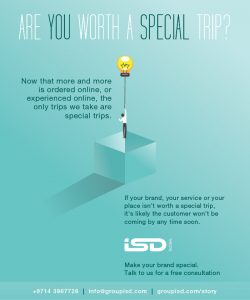