Did you know? The future apparently is already here, albeit a tad unevenly distributed.

Perhaps a lot of us get caught out like a deer in the headlights because the future arrives slowly and then all of a sudden.

That said, I can understand the obsession behind predicting the future. But why are predictions popular? Because they appeal to human nature. They create a sense of certainty in an uncertain world.

But they are wrong far more often than we assume.

Nobel Prize winner in Economic Sciences(circa 2008) Paul Krugman famously wrote in 1998 ” The growth of the Internet will slow drastically, Most people have nothing to say to each other! By 2005 or so, it will become clear that the Internet’s impact on the economy has been no greater than the fax machine’s.”

That one may have slightly missed the mark 😀. Well, well, the best of them can’t get the future right, so what are we crowing about? The problem isn’t just with experts. No one is great at predicting the future. Much of life can’t be forecasted, diagrammed, or reduced to a PowerPoint deck. When the future doesn’t match our expectations, our projections get thrown out (or worse, they’re still followed).

From people working on the bleeding edge of their fields..

To others bringing more humanity to technology and industry..

The call to action is for creatives to take control of our tomorrow.

In it, we’ll seek to recapture the feeling of optimism, not fear,  for the future. Because in the hands of creatives, the future is bright.

The creative process is often a matter of changing ‘ What is ‘ to ‘ What if ?’. We first observe the ‘ Status Quo ‘ and then imagine a ‘ Status Novus ‘- Keith Reinhard, Member, Advertising Hall of Fame.

The creative process is a process of surrender, not control. 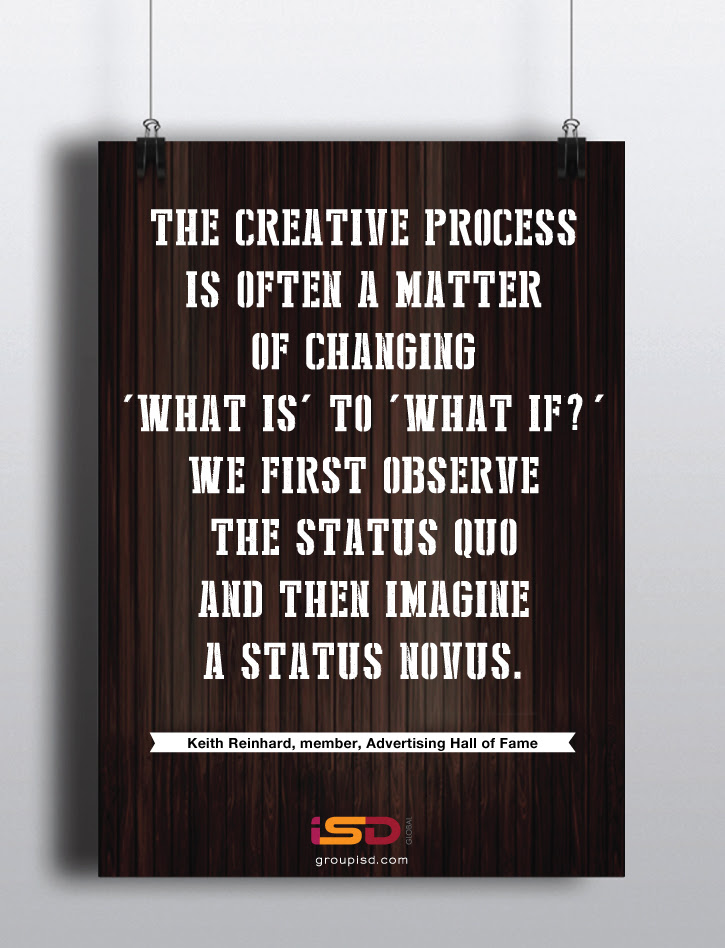 Every time you have an idea pop into your head and don’t muster the self-confidence to act on it seriously, think about the opportunity cost you are likely to pay.

In the balance sheet of creators versus consumers, the world rewards creators by an overwhelming majority. You will get far more from writing 100 blog posts than reading 100.(BTW, all good writing begins with terrible first efforts).

Consumption is deceptive because it makes you feel that you are productive when you are not. Artistic progress is the result of creation NOT consumption.

The myth going around is that creativity and productivity are mutually exclusive. But they are NOT.

So let’s create more than we can consume.

“You can’t use up creativity. The more you use, the more you have.” – Maya Angelou

Creativity is an infinite game. You can’t use up creativity. The more you use the more you have.

To survive, to avert what we have termed future shock (Alvin Toffler), the individual must become infinitely more adaptable and capable than ever before. We must search out totally new ways to anchor ourselves, for all the old roots – religion, nation, community, family, or profession – are now shaking under the hurricane impact of the accelerative thrust. It is no longer resources that limit decisions, it is the decision that makes the resources.