I was never even mediocre at either math or arithmetic. Hence, if this fails to add up, I am completely at home with it.

” So the writer who breeds more words than she needs, is making a chore for the reader who reads ” – so said Dr. Seuss.

Every year at the Oscars, the award for Best Picture gets all the fanfare( this year, of course Will Smith had other ideas). That may be stating the obvious. What might be not so obvious is in contrast, the award for film editing flies under the radar. But you may be surprised by the correlation between these two awards.
Since 1981, only three films have won “Best Picture” without also being nominated for “Best Film Editing”.
Why is editing so crucial in filmmaking?
A good film editor removes distractions by eliminating trivial or irrelevant things. She uses deliberate subtraction to add life to the ideas, setting, plot, and characters.
The best films are exceptional not because of what we see but because of what we don’t see. 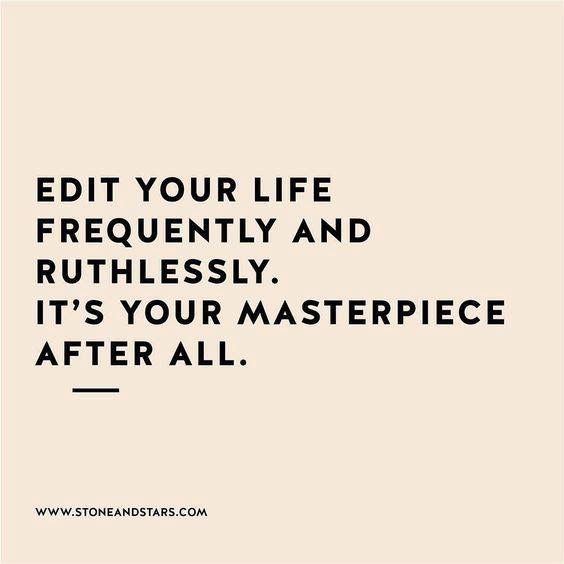 We can draw parallels here. And use the same principles to edit our own lives. We might be from Mars or Venus but on Mother Earth our never ending to-do list need not be a perennial match for our Herculean, Machiavellian competence and calibre that we seem to have been willy nilly blessed(cursed?) with. Probably there is a space to begin by ‘ separating the vital few from the trivial many ‘. The over ignored practice of essentialism.
Mind you, this is no easy task. To distill and rein in our incorrigibly elastic task list. How will we answer our ego? Or camouflage our insecurities? We find comfort in “keeping our options open”. But having too many options leaves us without direction. Having a few focused options gives our life a clear direction and makes decision-making easier.
Eventually, every cut ​we​ make brings joy. Maybe not in the moment, but soon ​we​ will realize the time ​we have​ gained can now be spent on something better.
​We, as people, ​systematically overlook subtractive changes, instead following ​our​ instincts to add. There is nothing inherently wrong with adding. But if it becomes a default path to improvement, that may be failing to consider a whole class of other opportunities​.
The paltry rate of subtraction in our ​life or ​organizational-improvement​ journey is appalling.​ To improve a redundant piece of writing, few produce an edit with fewer words. To improve a jam-packed travel itinerary, ​we hardly remove events or places to​ allow ​us​ to savor the ones that remained. To improve a Lego structure, ​we hardly take​ pieces away. Whether ​we​ ​a​re changing ideas, situations, or objects, the dominant tendency ​i​​s to do so by adding.
​In an increasingly attention starved​, attention craving economy, subtraction ​h​as a ​noticeability ​​​p​roblem​. When we add things, apparently it gets noticed. But when we subtract..we seem to miss the point.
Life has a way of taking over. We start running on auto-pilot especially when we are overwhelmed, in over our heads, or simply worn out from all that life is throwing our way. And this year, life is throwing more than ever our way.
After a while of trying to keep all the balls in the air, we stop paying attention and simply start reacting. Amidst all the chaos, we know something has to change, but we don’t know what or how.
When was the last time ‘ nurturing our heart and soul ‘ was part of our to-do list? It hardly make​s​ the list of things to take care of during the day. If ​we​ prioritize the nurturing of our heart and soul, by taking time to listen to what they want, by engaging in soul-soothing activities and by using them to guide our actions, ​we​ ​can​ get our life back. ​We​’ll remember who ​we​ are​(otherwise in the stage called life​,​ we are all practicing ‘ selective amnesia ‘)​ and begin to attract people and projects that are a perfect fit for the real ​us​.
S​o what is the take away? ​Yes, you guessed it, take away, to make way!
BEGINS
Rage seems to be in Rage when it comes to emotions traveling the farthest and fastest across Social Media networks.
The omnipresence of social media, the glut of messaging and content distribution platforms, the sophistication of social listening, combined with readily available news(breaking and broken) and events round the clock, the Damocles Sword hanging on people’s head called ‘ status anxiety ‘, the perennial quest for the next and best viral; all provide the perfect foil for brands and marketers to understand what kind of emotions travel the quickest on social networks and strategise what to ‘avoid‘ and what to ‘adopt‘.

If one were to go granular with the emotions’ basket, we would have the following and more in the bucket list:Happiness/Joy; Sadness/Depression; Rage/Anger; Pride/Prejudice; Disgust/Disillusionment; Wonder/Awe and so on and so forth.

Researchers at the Beihang University in China gauged various online emotions by tracking emoticons embedded in millions of messages posted on Sina Weibo, a popular Twitter-like microblogging platform. Their conclusion: Joy moves faster than sadness or disgust, but nothing is speedier than rage. The researchers found that users reacted most angrily—and quickly—to reports concerning “social problems and diplomatic issues”. It’s diabolical that a strong anti social emotion like rage gets the maximum social attention and currency!!!

In many cases, these ‘ social flare ups ‘ triggers a chain reaction of anger with multiple circles of the social community getting influenced and participating with equal or more venom.

In another study conducted by Jonah Berger and a colleague at Wharton based on 7000 articles covered by The New York Times, they discovered that if there was one emotion that overtook rage in billings, it was awe. The wonder and excitement of a new discovery of beauty or knowledge or a breakthrough in the fight against cancer; puts awe as an emotion in overdrive thus heaping bagfuls of viral.“Awe gets our hearts racing and our blood pumping,” Berger says. “This increases our desire for emotional connection and drives us to share.”

For all those who thought that sadness would emerge triumphant in the race to viral stardom, sorry to disappoint you. Sadness was considered to be a ‘ deactivating emotion ‘ where people pull down or withdraw leaving it with little torque to go the distance. If you feel a little melancholic about it, let that stay.

​So, the next time you see or experience road rage​, talk yourself into believing that it need not be infectious(or go viral).